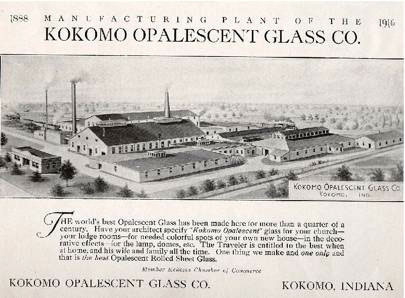 We don’t know who designed or assembled the windows but we believe that the glass for all of the windows was originally supplied by the Kokomo Opalescent Glass Company in Kokomo Indiana. It has been in business since 1888 and also supplied the glass used for restoration. The Hebrew alphabet, the writing of the ancient Israelites, has been in existence for over 3,000 years, and is the alphabet found in the Torah. One interesting aspect of the Hebrew lettering found on these windows is that numbers are represented by letters, so that a date is a sequence of Hebrew letters. Additionally, abbreviations are used repeatedly on windows, gravestones and memorials for commonly repeated phrases such as “May her name be for a Blessing.”

Most of the windows seen below have been restored, though the photographs may be pre-restoration.
They will be replaced as newer photographs become available.

This verse is very poetic in Hebrew and is sung to a beautiful melody during the Hallel service. It’s very appropriate for entrance doors to a sanctuary.

The two balcony windows have equilateral triangles within their design.

Translation of the Hebrew Text: Within each triangle is the word, “Adonai”, or God.

From time immemorial the Equilateral Triangle has been preeminently the symbol for Deity. The Equilateral Triangle, being wholly symmetrical, is the one perfect Triangle and thus becomes the symbol for that Perfect Being in which all things find their beginning. The number three is very significant in Judaism, standing for the three fore fathers, Abraham, Isaac and Jacob. The triangle is also the Masonic symbol for deity, because of its perfection.. 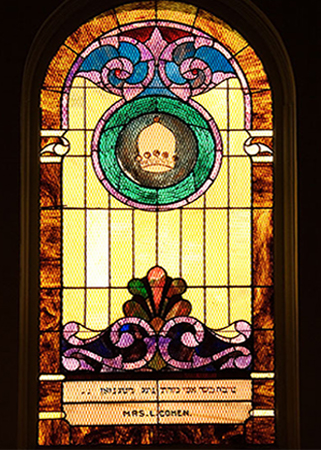 The upper portion or crown is very unique. Prior to the destruction of the Holy Temple in Jerusalem in the year 70 CE, the High Priest officiated and wore vestments as described in the Hebrew Bible or Torah in the book of Exodus. In particular, chapter 39 verses 30-31 describe the gold crown or mitre worn by the High Priest. Verse 30-31 says: And they made the plate of the holy crown of pure gold, and wrote upon it a writing, like the engravings of a signet, Holy to the Lord.

Translation of the Hebrew Text:
“Donated on account of my mother my teacher, Minna Nathanson”.
The last two letters are an abbreviation: May she rest in Eden (paradise).
The Hebrew letters Kuf, Dalet, Shin, Lamed, Hey and Yod (apostrophe) on the window translate to: Holy to the Lord.
Coincidentally, Cohen is one of the English/Hebrew names, which indicate a family with Kohen Gadol (High Priest in Hebrew) genealogy. This is a very rare example of that expression, especially in combination with the crown and dedicated to a modern day Cohen (Kohen). 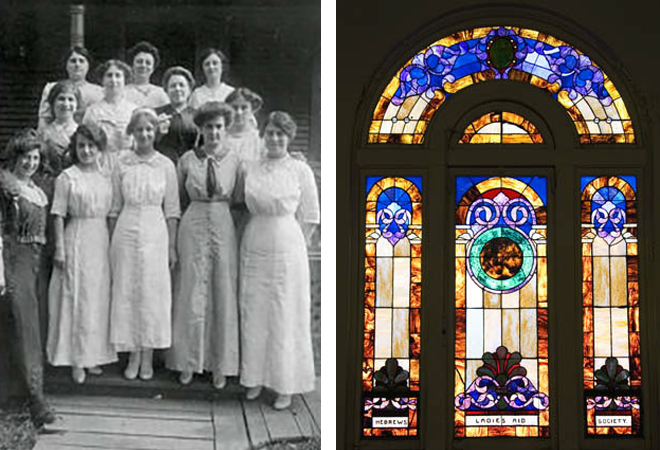 The Sunshine Club, also known as the Hebrews Ladies Aid Society was formed in 1909 to visit the sick and to raise money for the poor, both Jewish and gentile. 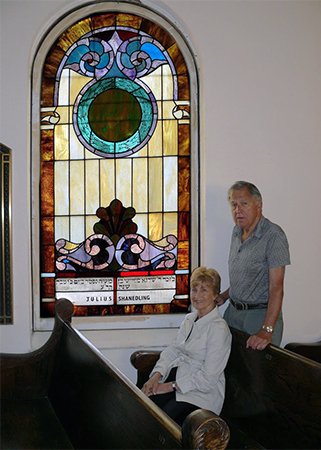 Ann and Felix in front of Julius Shanedling window

The Shanedling family: Ann Shanedling Phillips’ paternal grandfather, Julius Shanedling, his wife Annie, and his brother Morris (Moses), immigrants from Lithuania, arrived on the Iron Range in 1892, the year Virginia was incorporated as a city. Their parents, Phillip and Seva, three more brothers, Harry, Henry, Isadore, and two sisters, Hattie and Jeannette, plus their spouses soon followed. 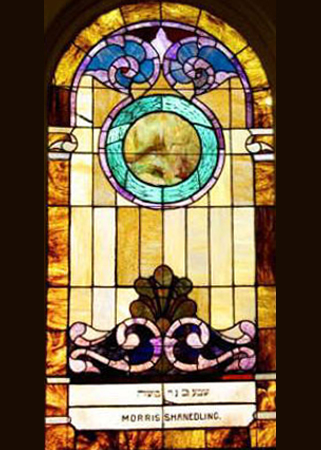 Morris Shanedling was in the clothing business along with his brother, Julius. Morris had a Sears Roebuck franchise and it was from this connection, possibly Julius Rosenwald, one of the founders of Sears, that $250 was given to help build B’nai Abraham.

Several of the Shanedling brothers were on the planning committee that organized the B’nai Abraham Society and contributed to its construction. The Shanedling Bros Men’s Store was located in Virginia. In the late 1920’s, Ann’s father, Monroe, son of Julius, started a women’s wear shop called the Quality Shop.

Translation of the Hebrew Text (some is in Yiddissh): “In memory of Rav Shragga Fyvish (possibly Feivel or in English, Phillip) son of Moshe who died on the 26th of Tevet in the year 5670.“
(note: Moshe is Hebrew for Moses.) Rav is an honorary title similar to mister. “In Honor of” is assumed since Sheva the daughter of Moshe (Moses) was still alive when this window was dedicated or installed. Another line states, “In memory of Rav Shragga Phyvish (Feivel or Phillip in English) son of Moshe who died…” 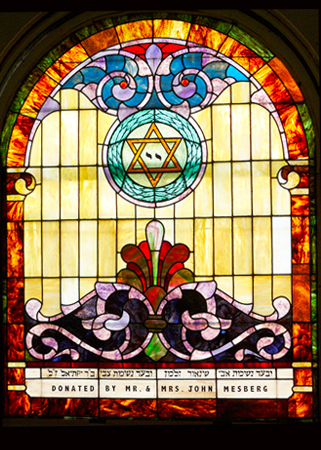 John Mesberg and his wife were among the earlier settlers in Virginia. The first Rosh Hashanah holiday dinner held in Virginia took place at his home in 1894. In 1908 John Mesberg was the president of the synagogue as they began the process of erecting a building. Mr. Mesberg was a pioneer furniture dealer. He was active in civic affairs and was an Alderman, who among other duties served on the Board of Health.

Translation of the Hebrew Text:The two Hebrew letters seen in the Star of David are an abbreviation for God and the inscription below translates as: “For the soul (in memory of) of my father Shneur Zalman and for the soul of Tzvi, son of (Reb) Yekutiel Z’L. The second word in Hebrew is nishmat which means “soul” and has the same root as the word breath as in human breath. The use of the word nishmat, soul, seems somewhat unique. More typical would be to use the word zichron for “in memory of” as on the Ben Milavetz window in the front of the sanctuary. Z’L is an abbreviation for: May his memory be a blessing.”

Funds for the restoration of this window was provided in part by George Mesberg, Chana Mesberg and Karen Mesberg. 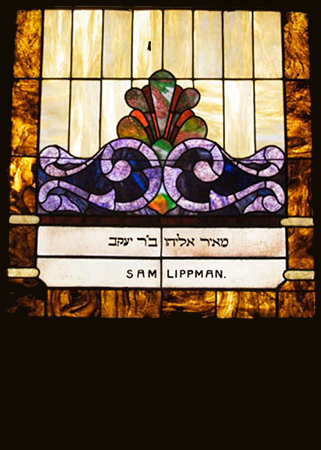 Samuel Lippman (1873 – 1918), who donated this window, was a community leader and merchant in Virginia. He was one of eight children descended from the Naividel family from Yurburg, Lithuania. Benjamin Lippman, Samuel’s brother, came to the Iron Range first and was instrumental in helping his brother, Samuel, join him. They were partners in a store in the town of McKinley and at one point also had stores in Mount Iron and Buhl. Samuel was married several times. His children were: Claire, Francis, Joe, Ernest and Shirley.

Translation of the Hebrew Text:‘Meir Eliyah son of Reb Jacob.” 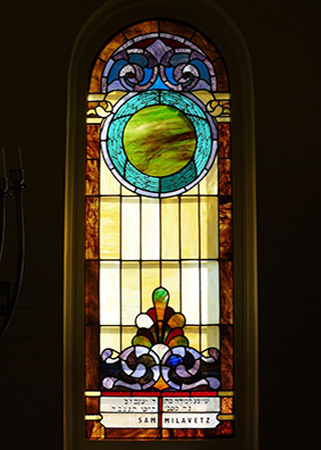 Sam and his brothers Ben and Ike were first generation merchants in Virginia. They owned and operated a number of different businesses and were among the original founders and officers of B’nai Abraham. They were followed by their 4 sisters: Yetta (Milavetz) Dorfman Phillips, Celia (Milavetz) Kaner, Ann (Milavetz) Shapiro and Sarah (Milavetz) Hostin and by their parents, Mr. and Mrs. Sholom (Shale) Milavetz.

Translation of the Hebrew Text:“Shayna Devorah Bat (daughter of) Yakov (Jacob) May her name be for a blessing. She died on 8 Kislev, 5866 (December 6, 1905). May her soul be bound up in the bond of eternal life. Sam Milavetz”

Shayna Devorah (born 1854), was the wife of Sholom “Shale” Milavetz and the mother of Sam, Ben, Ike, Yetta, Celia, Ann and Sarah. In the 1990’s, Daniel Milavetz (Sam’s son), said that there had been a mistake in the spelling of the displayed name (Malewitz) when the window was originally installed or repaired. It has been corrected.

A final mystery remains: Was there ever a symbol in the circle at the top of the window, as in the companion Ben Milavetz window? 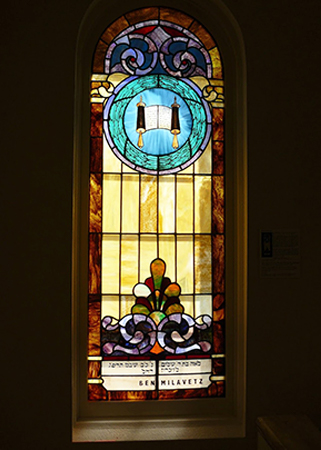 Ben Milavetz and his wife Lena (Kantor) sponsored the original Ben Milavetz window. They had no children. Ben, his older brother, Sam, and his younger brother, Isadore, “Ike” were first generation merchants. They owned several businesses in Virginia and surrounding towns and were among the original founders and officers of B’nai Abraham. Ben successfully ran for elected office in Virginia. He owned one of the first automobiles on the Iron Range. They were followed to America by their 4 sisters: Yetta (Milavetz) Dorfman Phillips, Celia (Milavetz) Kaner, Ann (Milavetz) Shapiro and Sarah (Milavetz) Hostin and their parents, Mr. and Mrs. Sholom (Shale) Milavetz.

This window features a prominent Torah Scroll, signifying the sacred scroll containing the Jewish law. The Torah scroll is central to the Jewish religion, and contains the 5 books of the Hebrew Bible. An active synagogue has a Torah scroll which is kept in an Ark usually at the front of the synagogue, on the eastern wall closest to Jerusalem, and usually at the highest place on the Bima.

It is believed that this window was dedicated in honor of Leah “Fannie” Milavetz, who died at the age of 17 on this date. She contracted Pulmonary Tuberculosis in New York, and died in Eveleth, MN. Leah may have been an aunt or a sister. 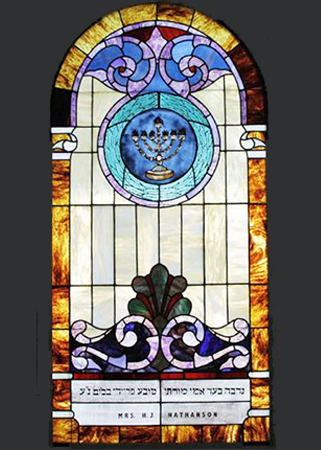 Translation of the Hebrew Text: “Donated on behalf of my mother my teacher Tobe Freida Bloom, The last two letters are an abbreviation for: May her rest be in Eden.”

Audra Keller recalls that the Nathanson’s lived on First Ave. South, kitty corner from City Halls and across from the Masonic Temple. 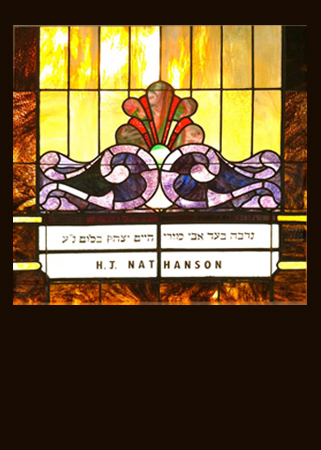 Translation of some of the Hebrew Text: “Donated on behalf of my father my teacher Chiam Itzchok Bloom. May his rest be in Eden.”
(This window belongs in the front of the building in a spot presently bricked out. Reinstallation is planned.)
Roman Window 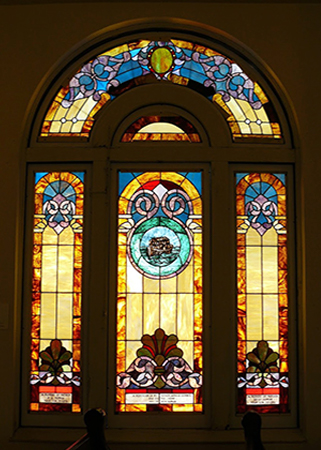 Translation of the Hebrew Text:

“In Memoriam of my father, Arnold Donner and sister Irene ~ Mrs. Joseph Roman”

“In memory of mother, Bessy “Goldie” Roman ~ Your son, Joseph”/

“Noah’s Ark in the circle. In Memory of Bessy “Goldie” Roman ~ Your son Joseph”