VIRGINIA — Ninety-eight year old Julie (Zadnikar) Sersha remembers from her childhood the old wooden wagon and barrel her family used to haul water for washing and chores before running water existed in Eveleth.

Her Slovenian parents had to “go to the corner,” a block or so away from the Zadnikar home on Jones Street, to pump water from a community well.

The barrel’s contents, hauled back on the wagon, had to last until the next trip to the well, said the Virginia resident, soon to turn 99.

“They sure didn’t use water like they do today,” she said. “They rationed it.”

“Just think, they used the water in there for washing dishes, themselves, everything,” Iron Range Historian Harry Lamppa said as he took a look at the barrel and wagon currently on display at the B’nai Abraham Museum and Cultural Center in Virginia. 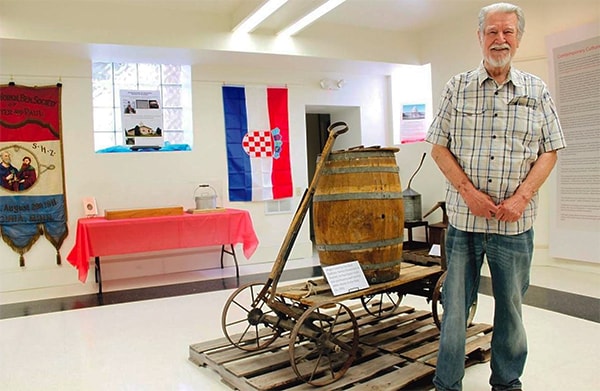 Iron Range Historian Harry Lamppa is shown with a water barrel and wagon used by a Slovenian family in the early-1900s. It is part of the “Preserving the Old Country: The Experiences of Croatians, Serbians and Slovenians in St. Louis County” exhibit on display this summer at the B’nai Abraham Museum and Cultural Center in Virginia.
~Angie Riebe

The artifact, provided by Julie Sersha’s son, Tom Sersha, is one of the centerpieces of the “Preserving the Old Country: The Experiences of Croatians, Serbians and Slovenians in St. Louis County” traveling exhibit.

The display, based on a larger exhibit of the St. Louis County Historical Society, will be at the center throughout the summer. It tells the story of Old Country immigrants and early Range residents like Julie’s dad, Matt Zadnikar, and his family.

There are several large panels detailing the history of the Yugoslavian people who came to northern Minnesota; dolls garbed in ethnic costumes from Serbia, Croatia, Slovenia, Montenegro, and Bosnia and Herzegovina; and flags from each of those countries.

There are a number of other artifacts, such as the wooden immigrant trunk used by the Gruden family on its journey from the Old Country to the New World.

John and Josephine Gruden were uprooted from their native Yugoslavia during World War II when the family fled from communism and took refuge in former prisoner-of-war camps in Austria before immigrating to America in 1949.

The family, which included boys ages 11 and 6 and a 1-year-old girl, traveled by train from New York to Minnesota, settling in Gilbert.

“All of the family’s possessions and belongings” were transported in the trunk, roughly the size of a large piece of luggage, by boat to America, Lamppa noted.

The Grudens were among those who came over during one of the “later waves” from the Old County in Southeastern Europe — the modern counties of Croatia, Serbia and Slovenia, said the historian.

“This area of the world (the Old Country) has been ruled by many different empires and powers causing its boundaries to change multiple times,” Lamppa wrote in a summary of the exhibit. “When Old Country immigrants began immigrating to Minnesota and St. Louis County, the area was still under Austro-Hungary rule in the north and Turkish-Ottoman control in the south.”

A panel at “Preserving the Old Country” provides a chronology starting in 1878, when Serbia gained independence from the Ottoman Empire, to 1945, when a communist government was established under partisan leader Tito, to 2008, when Kosovo, a former territory of the Serbs, “became independent, though not officially.”

Immigrants left the Old Country for political and economic reasons and in search of better opportunities. Some of the men left to avoid being forcefully drafted into the military, according to the exhibit.

Large Slavic communities developed along the Vermilion and Mesabi ranges. Immigrants were drawn to mining because many didn’t have a formal education, explains the exhibit. It was an adjustment from the rural life of the Old Country.

It was a tough life for immigrant families, like the Sershas and Zadnikars, said Tom Sersha of his grandparents.

They had worked as farmers and in “small cottage industries,” he said on a recent day at B’nai Abraham, an historic former synagogue turned museum and cultural center.

Yugoslavian immigrants joined numerous other immigrant groups who went to work in the iron ore mines. “Can you imagine, all those ethnic groups working together, not knowing the language?” wondered Steve LaPatka, of Virginia, who assisted with installing the exhibit.

The exhibit includes a colorful, timeworn banner from a Croatian lodge, organized on Aug. 20, 1911, in Virginia, and number of small artifacts, including traditional shoes, hats and handcrafted items from Slovenia, Serbia and Croatia.

Tom Sersha, who once worked at the former Ironworld, now Minnesota Discovery Center in Chisholm, contributed several pieces, including hand-painted Slovenian woodwork and a miniature replica of a Slovenian hay-drying rack called a kozolec.

The Yugoslavian immigrants established a number of churches and lodges on the Range, Lamppa said.

While fraternal organizations preserved the immigrants’ heritage, the people “were proud to be Americans” and strived to assimilate when outside those locations, Sersha added.

And those immigrants shared with the area all of their “good food,” he said with smile.

The exhibit includes information on the cultural aspects of the South Slavic communities that continue — from potica and sarmas to traditional music.

The cultural center — itself a “nice, adaptive use of space” — is “an excellent location” for such an exhibit, Sersha added. The display is intimate and bright and helps to preserve eras in history when such little things — like the quarter his mother received from her parents on the Fourth of July — meant so much.

“It’s precious how they looked at life,” he said.

Julie Sersha said she remembers talk in the family of getting rid of the water barrel and wagon, which was used in later years to harvest hay in the fields.

“It came in handy,” she said. The 98-year-old is rather glad, she said, that the piece of history remains preserved.

“Preserving the Old Country” exhibit will be open to the public from 1-3 p.m. Wednesdays and Fridays throughout the summer, and one hour before and after programs at the B’nai Abraham Museum and Cultural Center. There is no admission charge.